It's all about parti... winning

In the picture you can see elvegrimare practicing historical manuscript fighting with sword and buckler. The oldest preserved manuscript on duelist fencing, the I.33, was written in Germany around the year 1290 and portrays a monk teaching his various students deadly techniques. Kids, don't do this at home. Or at least read the manual first. 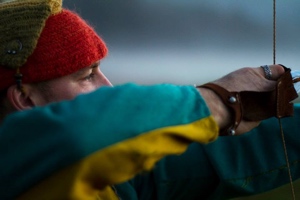 The vikings loved competitions and athletics to the point where constantly bragging about how good you were in certain kind of game was a way of life. In other words, not much has changed in a thousand years. Some of these games have proven to be simple enough to reconstruct, and quite enjoyable to watch as well as play. When going to markets and events Elvegrimarne are of course more than willing to demonstrate. Modern athletic sports such as archery, running, swimming and others were just as important during the viking era to demonstrate strength, balance, agility and stamina. Just about every market we go to, some form of these are bound to be practiced.

One of our favorites is "Knattleikir", which literally means play with a ball. It is sort of a viking age rugby, with the twist of using wooden bats, reconstructed by danish archaeologists. This game is mentioned in several sources from the viking age, but the rules are never explained in full. The reason for this is believed to be because it was such a common sport that everybody knew the rules (no need to mention it specifically). It is, however, well known that it could be fairly violent. Well, ok, that was an understatement... in some cases stories tell of people who died during a game of Knattleikir. At this point we'd like to stress that the version we play is a much nicer one, the rules reconstructed from the very sparse sources we could dig up.

The players are divided in two teams and once that is done the goal is to get a ball across a raised rib on the other side of the field (yeah, have you heard that one before..?) You are allowed to tackle and otherwise stop each other (I once saw a large man sit on another man, quite effective I might add). The ball can be passed, kicked, held, thrown, carried for short distances, but to score you need to hit it with your wooden bat across the goal. A more thorough explanation of the rules you can find in the magazine Viking Heritage 3:2002. 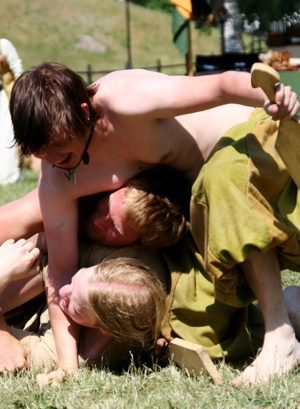 A quick study of the historical ballgame known as Knattleikir by Robert Dahlström. Baseball and rugby all rolled up into one tough game. Oh, and you can't stop playing until the beer keg is empty (no seriously, it's in the rules).