Rules of the Game

Everything you need to know about the When, the Why and the How. Tour the one stop information board. »

Don't miss our event of the year! Help us to once and for all settle if Hisingen is part of Gothenburg... or not.»

Battle, Tournament, Feast and Entertainment.. Make sure you are up to date on this years Battle of Hisingen. »

Each team will have the same number of archers and arrows. The archers will be authorized by the organizers at the start of the game. Archers may be equipped with gloves and close combat weapons. All bows and arrows will be checked and approved prior to battle.

Javelins will be used and at the start of each battle these will be evenly distributed between the teams. Only peoples authorized will be allowed to throw the javelins.

All other units will be equipped with hand to hand weapons and shields. These warriors represent the allies to the chieftains. They will be loyal to their chieftain in all of the four battles.

To be the most successful of the chieftains it is important to be able to control the area after the battles. This means that winning with just a few men still alive is not enough. To make it simple a point system will be used. There are 3 points to be won each battle, where each of the following will be worth 1 point at the end of each battle:

Each team will score 0-3 points in each battle. When all four battles are over each team will have scored 0-12 points. The team with the highest total score will be the winners.

The battleground is made up by dense forests divided by open spaces and some ponds of water. There are also wet areas and some low stone walls. Some paths connect the different areas. All of this makes up for a very diverse terrain with quite a few interesting strategic choke-points.

The teams will begin each battle in a different starting position. The opposite team will start in the opposing corner. If one team starts at point 1 the other will start at 3, and so on.

Before the battles begin there will be a walkthrough of the whole battlefield with both teams. After each battle there will be a small amount of time allowed for collecting arrows from the previous battle, scouting the new starting point and to come up with new tactics. All warriors in each team must be at their designated starting area at the beginning of a new battle. 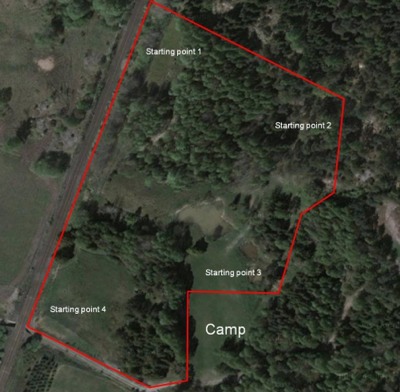